I recently had the opportunity to design (and have fabricated) a sheet metal chassis for my Fender 5E3 clone guitar amp. I was given a few hints about what things were possible with an industrial press brake, but until I watched the parts get fabricated, I had never actually seen a serious vertical press brake. I learned quite a bit about how a skilled brake operator can fabricate beautiful parts even when the designer was clueless or negligent.

The following renderings of the sheet metal parts show the ubiquitous amount of features incorporated into the two parts, which was necessary for the compactness of my overall design (remember, I’m trying to squeeze a full size 1×12 combo amp into a practice amp format). 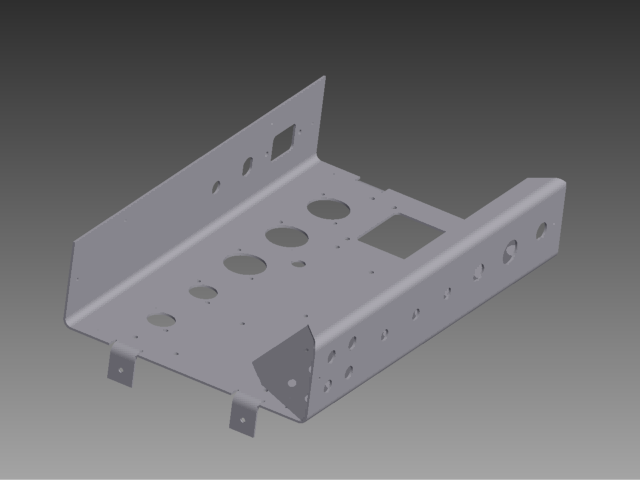 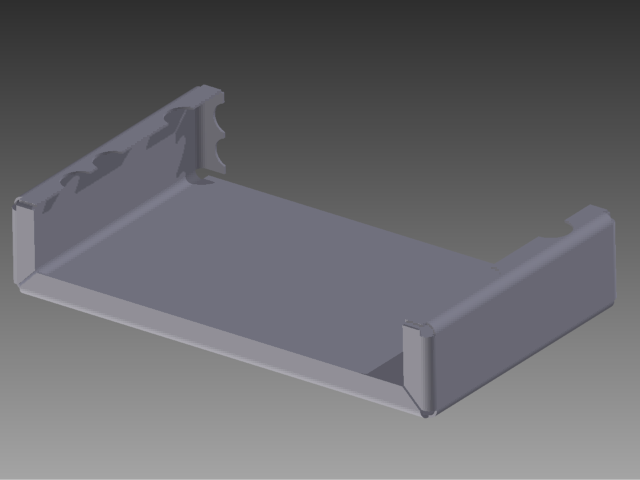 Many of these features are problematic, both when attempting to draw the feature, and when the brake operator was trying to bend the parts. Perhaps they are hard to draw, because programming the CAD tool to do something that is difficult to manufacture is not a priority!

The biggest issue with my design was features that were too close to the bend. Anything that is not perpendicular to the bend is subject to “roll out” according to the operator. He managed to beautifully bend several problematic flanges by using a “backing plate” technique. Not sure if that is an official term, but basically it amounts to bending the real part against the die, and having a support piece of sheet metal underneath it to make the weird features bend properly. You can see the difference between a normal bend and a backing plate bend by looking for the absence of the U-block tool mark, a slight discoloration line running parallel to the bend. 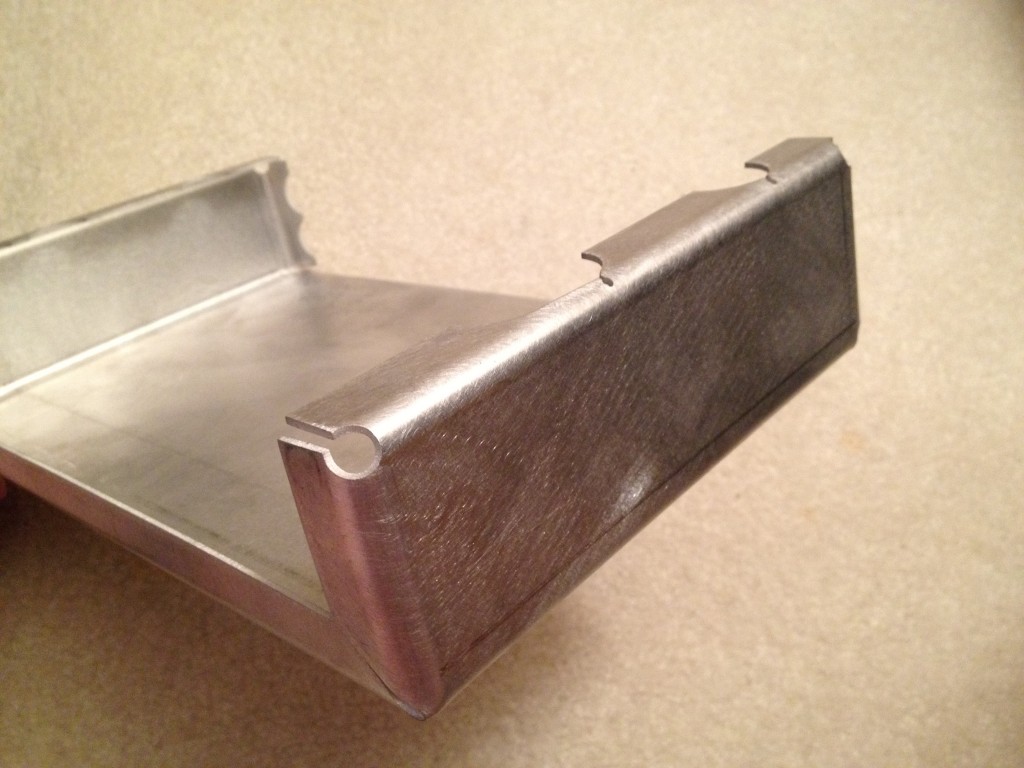 The two small holes in this part are defects from the water jet fabrication, not actual features in my model. 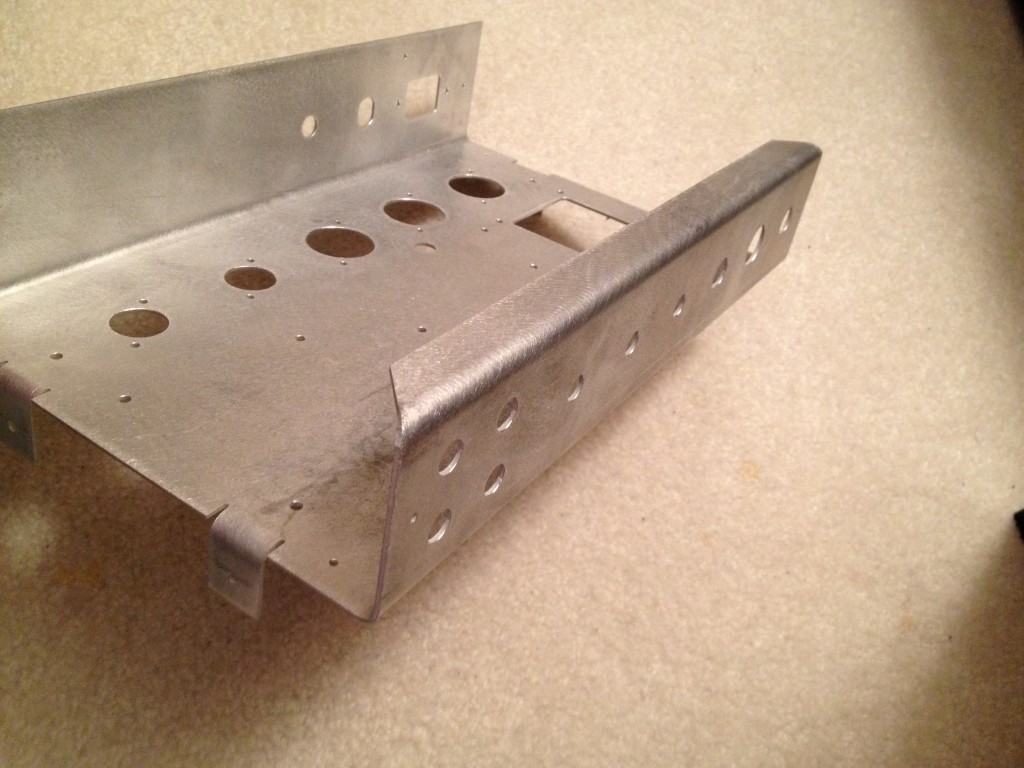 With this tooling mark, we can actually determine how to avoid the backing plate problem, which simplifies the fabrication of a one-off part considerably. The mark is .445 inches from the outside of the adjoining section, so the minimum safe bending flange length is .5 inches for my Aluminum 2024-T3 .062 thickness sheet at the minimum bend radius of 3/16″. Turns out, my 3/4″ flanges were a good safe length before cutting features out of them.

In the end, it took about two hours total to bend both parts, but it could have been twenty to thirty minutes if the flanges had been much simpler. I had been thinking that I wanted to the box to help shield circuit from RF noise as much as possible, but considering the old enclosure had negligible noise and negligible shielding the extra flanges are probably a waste.

One additional item worth mentioning: machine calibration is rarely perfect. My brake operator was able to bend my parts with almost extreme precision, but he had to set up each type of bend with 3 or 4 test attempts before attempting to brake the actual part. If the machine readout was perfect, then he could have just punched in the numbers and bent the part. The operator had experience with the machine, and knew not to trust the readout without testing it, so my parts were not ruined, but that is why you should put as many dimensions on the flat pattern and folded views as possible. You really do not want to force the brake operator to be guessing or doing math on your part, that is what engineering is for!

I know I mentioned this before, but I really cannot stress it enough, DIMENSION EVERYTHING! Most machinists or machine operators did not make quite the grades you did in their math classes, and even if they did, you are trusting someone else to figure out something that you already know. Don’t be stingy, just tell them and you will get your parts back faster and cheaper!

NOTE: In my case, the parts I designed were being fabricated on a press brake, using the air bending technique illustrated in the video and the bottom image on that wikipedia page. If you believe wikipedia, the Sheet Metal page has some additional info, indicating that the bend radius is a function of the width of the lower U-block, V-block, or Y-block, but my inner radius was 3/16″ and die radius used in the brake was also 3/16″.

The main idea is to mount a camera and possibly a shotgun mic to a quadcopter in order to catch epic film.

This concept was featured on Gizmodo here  and another place here was just so cool. We are especially impressed by its mobility, and have already thought of dozens of shots that would be really cool to take with this.

Here is more footage of the inspiration (named CineStar) operating.

-Interested in wifi in order to stream webcam video too

What self-respecting student of Georgia Tech has never owned (or wanted to own) a nerf gun? And how many of those were frustrated with the lack-luster performance of the “weapon”? That is what makes this project perfect!

This project will integrate electronics, controls, actuators, and elements of mechanical engineering in an intricate blend to enhance the original design (while maintaining as much of the exterior aesthetics as possible).

My main thought is to use a trigger-actuated “kicker” to push the next dart into a flywheel. More information and specs will be forthcoming as I have time

The Cyclonic Dust Separator project proposal won one of the 5 Seed Grants that were awarded this semester!  I will start really getting into this project next week, over spring break.  Here is the text of the email:

For those of you who didn’t receive a grant: have no fear! We’ll be doing this again in the future, and we’ll be better at it then too. One of the problems with our first attempt was the generality with which the proposal guidelines were written – we’ll be more specific about what we want next time, and will hopefully have more grants to award as well.